Our focus work of art for the second half term is Tiger in a Tropical Storm; Surprised by the French artist Henri Rousseau.  The original is in the collection of the National Gallery in Trafalgar Square, London.

Rousseau painted it in Paris using the botanical gardens to study plants.  He only became a full time painter late in life after retiring from his job as a customs officer.  Initially his paintings were dismissed as ‘childish’ by critics, but his work was admired by modernists including Picasso who crowned him at a feast when he was an old man.

From this starting point we will make our own interpretations of the picture, in different sizes, and using a range of media.  We will look at tigers and other jungle animals and their skin patterns.

We will look at different animal habitats, especially jungles, and contrast jungles with other environments such as deserts and Polar Regions. We will make dioramas of different habitats such as Polar, Desert, Ocean and Jungle.

We will read a range of books about animals and think about how people keep animals.

The original painting is in the National Gallery in London.

You can find a picture of the painting to colour in:

Find out more about the painting by watching this video:

Henri Rousseau painted Tiger in a Tropical Storm in 1981. He portrayed a tiger, illuminated by a flash of lightning, preparing to pounce on its prey in the m...

Children can use  pastels or different media to recreate

‘Tiger in a tropical storm surprised.’ 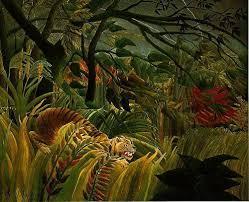